10 Things You Should Never Put In Your Garbage Disposal 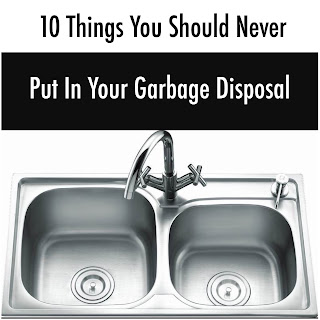 We recently learned the hard way that there are many items that should not be put down your garbage disposal. One day last week I was doing the dishes and I noticed that the water was not draining down the sink and the water was rising. I flipped the garbage disposal switch on and the water and all the food bits came up the other side of our double sink. When I turned off the disposal the water came back up the right side of the sink… it looked like a mini geyser.  We tried to fix the clog ourselves (post to come), but we ultimately found out that the clog was much further than we could reach. We had to call in a professional. Here is a list of what we did wrong and what you should avoid putting down your garbage disposal. These tips could help you save hundreds of dollars and a major headache!!

1.  Grease, Oil and Fats
Pouring grease and oil down your drain will eventually lead to build up on your blades which will inhibit the blades from grinding efficiently. The grease and oil will also build up an in the inside of you pipes, which will be very difficult to clean out. This also goes for that bacon grease. After you fry bacon you should allow the grease to solidify and wipe it out with a paper towel and toss it in the trash.

2.  Egg Shells
This one was a surprise for us. We had always heard that putting egg shells in your garbage disposal would help sharpen the blades. Turns out this is not true. When we opened our pipes to look for the clog we were shocked at the amount of egg shell bits that poured out with the water. We had a bucket under the pipe and the egg shells were just sitting at the bottom of the bucket and did not slide out when we poured the water out. Signaling to us that there were probably a lot of egg shells just sitting in the bottom of our pipes not moving.

3.  Pasta and Rice
You should never put pasta or rice down the garbage disposal because they are two types of foods that expand when mixed with water. So after the water has passed through the pipes the pasta and rice will stay in the pipes, expand and stick to the interior of the pipes... causing a major blockage.

4.  Potato Peels
Yep, guilty again. I have always peeled my potatoes right in the sink and then jammed them all down the garbage disposal. Apparently, the starch in potatoes eventually turns to a black paste and cause major blockage. Instead of peeling directly over the sink, place a colander or dish towel in the sink to collect your peels for easy clean up (into the trash can).

5.  Celery and Asparagus
We were told that celery, asparagus and any other fibrous foods were to stringy to put down the garbage disposal. They can actually wrap around the blade causing damage.

6.  Bones
This one sounds obvious and we've all heard that bones can sharpen the blades. Turns out bones have the opposite effect and can dull the blades. Not to mention you wouldn't want hard bits of bones flying out at you.

7.  Large Pits
Cherry, avacado and other large pits are to large for the disposal blade to break down. Throw these in the trash instead.

8.  Coffee Grounds
The bits of coffee ground can and will accumulate in your pipes eventually blocking your pipes.

9.  Onion and Banana Peels
Extremely fibrous materials like the outer skins of onions, bananas and artichokes should never be put down your disposal. They can cause damage to your disposals motor, because they are to tough for the blades to break down.

10.  Non-Food items
The professional plumber that came to help us with our clog told us stories and customers putting things like plastic wrap and foil down their disposal. Throw away all non food items into the garbage can not the disposal.